Less litter thanks to NFDC getting 'Crabby'

An innovative approach to tackling beach litter in the summer reduced litter at the New Forest coast by 10 tonnes, saving £10,000 in clean-up costs. The reductions followed the 'Crabby' coastal litter initiative carried out at Milford on Sea, Barton on Sea and Calshot during August 2020.

The campaign, which used images of a giant crab, was aimed at tackling rising amounts of beach litter during the summer and included waste-bag dispensers at key spots, and messages to visitors 'Don't make me crabby, take your litter home'.

Cllr Alison Hoare, portfolio holder for environment, explains how the project came about, "After the April lockdown was eased,  people flocked to the beaches causing a significant increase in coastal litter, including what is known as 'polite littering' where rubbish is discarded next to bins that are already full or overflowing.

"To address the mess, we put up large billboards at busy areas at each of the three beaches.  They featured our character Crabby; a huge illustrated crab, reminding visitors to clear up their mess and encouraging them to take a free litter bag so that they could safely and easily take their rubbish home."

With his eyes on stalks, crabby also served as a gentle reminder that beach behaviour was being monitored. The message was repeated through stickers on litter bins, displays in the area and on social media, where visitors were encouraged to get involved with a photo competition, sharing their selfies with #Crabby for an opportunity to win £100 of shopping vouchers.

Competition winners, Miles, Ruby and Fraser got #crabby about litter when they were visiting Barton on Sea during August on a staycation. Miles posted their winning selfie on Instagram.  He said they often enjoy visiting Barton and he finds it is usually really clean and tidy. 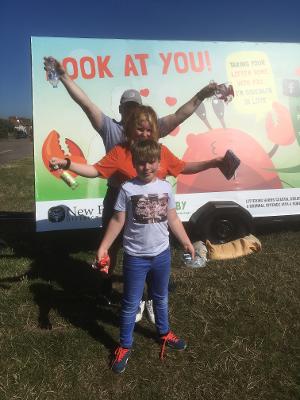 The winning crabby selfie.
Pictured from back to front Miles, Ruby (13) and Fraser (10) at Barton on Sea in Summer 2020.

He said; 'It does wind me up when I see people dropping litter. We can do a bit better than that, just be courteous, look after the world. I try to make sure that if I've got rubbish it goes in a bin, or I put it in my pocket to take home.'

Cllr Hoare said, "We're certainly not feeling crabby about the outcome from this campaign. Thank you to all those who did the right thing and cleaned up their mess, you have prevented more than 10 tonnes of rubbish from being discarded at our coastline, where it could pose a threat to wildlife, and risks polluting our natural beauty spots."

The outcomes from this project will help the council plan further effective approaches to tackle littering and help keep the New Forest environment clean and safe. This campaign is just one of a variety of interventions to tackle littering across the New Forest which also includes regular patrols and issuing fines of £80 for those who drop litter.